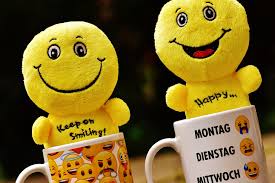 Smartphones are now found in every corner of the world, so the speed and ease with which we can communicate with people around the globe has increased in line with this. However, even this ‘instant’ messaging doesn’t seem to be fast enough for us anymore. When we have to type out a text, or reply to a thread on a social media post, we are looking for a way to communicate our views or thoughts with one simple click of a button – hence, the popularity of the Emoji!

A message from a friend to meet for drink after work, or a text from a family member telling you they’re thinking about you, can all be answered with a smiley face, a thumbs up, or a heart emoji and the response will be understood without the need for words or long conversations.

Additionally, an emoji has the bonus benefit of adding tone and perspective to an otherwise two dimensional message. For instance, sarcasm, humour, wit, tone and mood can be hard to gauge from a text, but add a laughing emoji, a winking face, or one of the similar emotive graphics and the recipient will be made aware of your emotional state or implied viewpoint in an instant.

The History of Emoticons and Emojis

According to Reader’s Digest, the humble emoticon began life way back in 1881 in ‘Puck’ magazine.

They were simple punctuation marks used to express four facial expressions; joy, melancholy, indifference and astonishment, and they named them ‘typographical art’.

In 1982 they were used by Scott Fahlman, a faculty member at Carnegie Mellon University, to help people tell the difference between humorous and serious messages on the university’s digital message board. He requested users add 🙂 to denote a humorous post, or 🙁 to denote a serious one. He also advised readers to view it sideways!

Emojis, as we know and love them today, were created in 1998 by Shigetaka Kurita, an engineer at the Japanese phone company, NTT Docomo. He wanted to find a way for customers to express themselves through icons and came up with a set of 176 icons, which he named emoji, from the Japanese “e” meaning picture and “moji” meaning character.

The inspiration for the icons came from manga, Chinese characters and the international symbols for bathrooms.

At present, there are over 2000 Emojis, with more added regularly.

Why is the Emoji a Globally Recognised Image?

In a nut shell, an emoji is a universal symbol.

A smiley face is a smiley face, no matter where you reside in the world, and who doesn’t prefer seeing the hysterically laughing face, with tears of joy streaming from the corners of its eyes, instead of the abbreviated LOL?

Language has always been somewhat of a barrier to communication, especially when considering cultural differences, but we all have similar emotions and emotional responses, so a simple symbol which can communicate happiness, sadness, anger, frustration, love or even sport, can be shared by everyone around the world, no matter which language they speak.

The Emoji has become such a large part of everyday life that businesses are starting to take advantage of the benefits they offer.

For example, Domino’s Pizza began a Twitter campaign in which people could order pizza by tweeting the company the pizza Emoji through a chatbot feature.

Likewise, McDonalds used Emojis in one of their recent campaigns, limiting word use to just “good times” which was preceded by several Emojis showing roadworks, sad faces, then the famous McDonald’s ‘M’, followed by a happy face. The simplicity of the campaign needed little explanation, as the Emojis did all the work.

Emojis have the power to transcend cultural and language barriers so a marketing campaign that makes use of them can often be understood globally – a definite win in any marketer’s book.

As with any popular trend in the modern era, they must evolve to remain a relevant part of social culture. The Emoji has developed in quantity and quality over the last couple of decades and it has also introduced some socially inclusive adaptions such as, same-sex couples, people in wheelchairs, and a range of skin tones.

The Emoji has evolved to become an integral part of modern culture, providing us with a way to communicate our thoughts, feelings and emotions with others, even if they don’t speak our language.

It is a universal language, understood and used by almost everyone, whatever their native-speaking language.