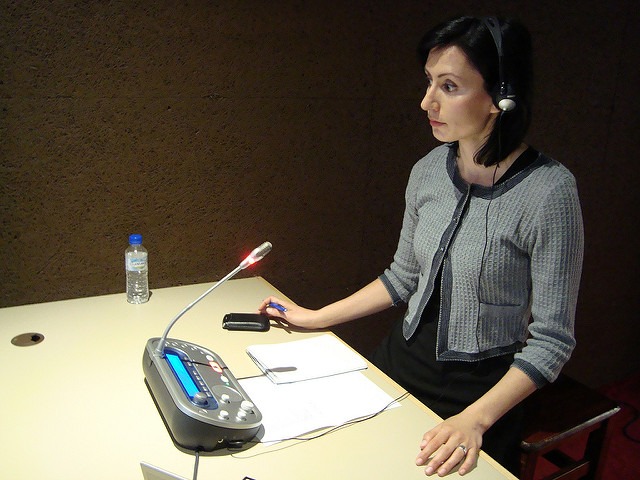 Imagine the G7 getting together without the use of interpreters or a hospital not being able to understand what the sick, foreign patient in-front of them needs? We work with clients on a daily basis within commerce and trade that rely on interpreters for negotiations and the like.

Without interpreters, the world would be very different! The job, as a result, is far from simple and far from uniform in its nature. Although interpreters all share the basic skill of translating between two or more languages, how and where they do this differs depending on the situation.

So how do interpreters differ?

Here are 4 basic types of interpreter that cover most, if not all, means and ways of delivering it as a service.

Simultaneous interpreters essentially do the translating ‘live’, meaning at the same time as what is being said. This is what we see on live news feeds for example where sometimes we listen to a delayed translation by a voice other than the speaker. It is also commonly seen at political meetings such as at the EU or during major international conferences. It’s application and uses are endless.

In most cases the interpreter sits in a soundproof booth, listening via headphones to a speaker. At the same time as they listen they also try to translate into a microphone which is sending out the translation via radio-waves to people wearing headsets.

Consecutive interpreters translate what is being said during pauses in speech. This types of interpreter is usual for face to face scenarios such as meetings, court cases, interviews, etc. It can take place between two or many people.

The consecutive interpreter has to remember what is being said and at agreed or convenient points in the conversation, translate what has been said. This essentially doubles any sort of conversation.

Consecutive interpreting is more than likely what is used when there are smaller numbers of people. It is also known an liaison interpreting.

A.K.A. chuchotage interpreting, this can be seen as half-way between consecutive and simultaneous interpreting.

Translation is live in a sense, but without all the equipment. What usually happens is the interpreter sits next to or near the person(s) needing the translation and whispers what is being said so as not to disturb those around them.

Phone interpreters essentially carry out consecutive interpreting over the phone between one or more parties. This is not to say that simultaneous interpreting can not also be applied in the same way; just that it is used much more in a consecutive manner. An interpreter is usually working remotely, dialed into a conversation and speaks between the parties.

Phone interpreting is commonly used in public services and in areas where physical interpreters are not possible such as at hospitals, for the police and government offices.